skip to main | skip to sidebar

The Outcast Becomes The Teacher

Well, it's pretty much over now, the heavy season that revolves around Valentine's day has come and gone. This was my first as an angel and even the expectations and warnings from Archangel Michael didn't really prepare me for what I was in for. It was essentially a constant state of work; after every word of inspiration, there was another subject to run to. Lonliness is not the most challenging problem a person can have, but the steady, unending flow of projects without respite gets a little draining after a while.

Suzanne said something kind of funny, she said, "Well maybe the weekends won't be so bad, cause, like, all the lonely people will siting home by themselves because they have nothing to do."

She's so sweet. Living the kind of life she did, she really has no idea what it's like to be a lonely person. But the great thing is that she so badly wants to learn. So this was actually the first time Suzanne and I teamed up. We went to this bar, and I motioned to where five people were sitting. "What do you see?"

I said, "look closer. There's one couple. See those two guys talking? They're friends. Look at the guy in the middle."

She took a look. "The one watching the tv?"

"Yes. By himself. That's the lonely guy"

It felt good to mentor someone in the ways of loneliness, like my years of training had finally become useful. Then, with powers of perception in hand, we went to work.

More to come.
Posted by Michael Stuart at 10:37 AM No comments:

Another Way To Salvation

I'm so not even ready to talk about work, as I'm still recovering from Valentine's Day. So let's talk about a revelation of a different kind. I've always held a disdain for all things safe and conventional. Ordinary is boring, and let's face it, usually the mark of a lack of creativity or originality. Ordinary fuckin' culture. I hate it. 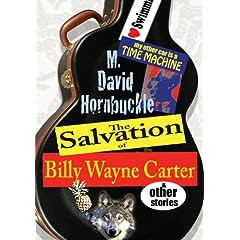 That's why it was so great to stumble across this novella called The Salvation Of Billy Wayne Carter by an author named M. David Hornbuckle. On the surface it's about a musician who rises to legendary status, but it's really about so much more. It's an analysis on the human condition painted with a surreal palette as it jumps through a web of time and characters. Original, sometime challenging (without the self-impressed condescension that comes with forced literary eccentricity) and most definitely not conventional.


Anyway, if you want to read more about it or just plain get your hands on it, you can check it out at:

You're welcome.
Posted by Michael Stuart at 6:34 PM No comments:

Nothing's Certain But Death And Valentines

I used to wonder if there really was anything to the idea of reincarnation. Not so much because of the idea of extending the soul's tenure in the physical world, more because of the concept of collected karma. The idea that the sum of your actions determining your state of being in the next life always resonated with me, especially my states were especially low. The idea is not so much the state you're born into, but the one that follows you over the course of your life; poor actions translate into poor consequences in the next life. The barbaric run of bad luck I had when I was alive often made me wonder, if this notion is real, exactly how fucking evil was I in my last life to earn the life that I was given? Given the relative privilege of my family background, I think I wasn't a murderer or dictator, but at the very least, I must have been a REAL asshole.

Turns out I'm not alone in that sentiment. See, the angels are in our busy season right now. Valentine's Day is approaching. Think of it like with accountants and Tax day: to us, February 14 is our April 15. Marley is getting signals of despair everywhere she goes. "People wonder what they did to deserve the loneliness they're feeling," she said the other day. "Some of them think about that karma thing too. It's so sad. It's like they're blaming themselves."

I never thought about it like that, but as emotionally dark as I already know New York City to be, the depression booster shot it gets in the high season pushes it beyond anything you'll ever know. A friend of mine once called NYC "loner capital of the world." I didn't know about that, whenever I was alone, I always saw couples paired up and groups of carousers celebrating the invention of the pint glass. That's the immensity, when you're an angel, you realize the loners are EVERYWHERE, milling about being given very little from which to glean joy out of life

As you may have guessed, the constant flood of inspiring reassurance during the high season has been a little emotionally taxing, and my underlying cynicism creeps up from time to time. Just one more week to go. Then maybe I'll go to Ireland for a little while.
Posted by Michael Stuart at 7:49 PM No comments:

Order I Am The Angel here:

I used to be human, not so long ago. Then I died and became angel. Now I work in Heaven and walk the Earth, trying to rescue the sad and angry with enough time left over to take in a little baseball, 'cause divine intervention doesn't have a clock either . . .


Dislikes: Hospitals, funerals, people (but getting better with that).